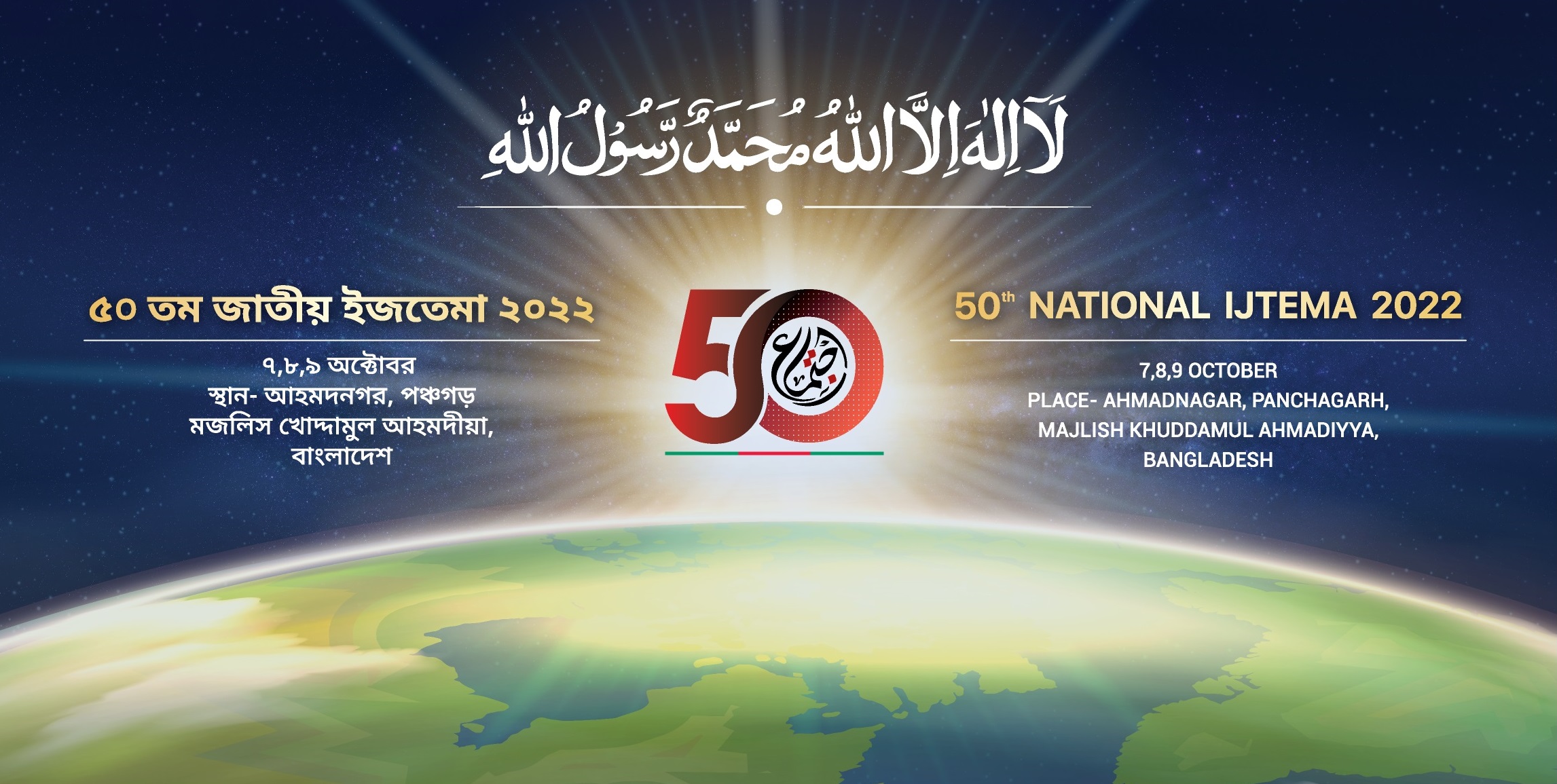 By the grace of Allah, 50th National Ijtema of Majlis Khuddamul Ahmadiyya, Bangladesh successfully held on 7-9 October 2022 (Fri, Sat, Sun) at Ahmadnagar, Panchagrah on Bangladesh Jamat’s own land alhamdulillah. This historic event had participants from 100 Majalis out of 108. Total attendance was 1720 in which khuddam were 953 and atfal were 641, and other participants was 126. Total Waqfe nao participants was 153 (Khuddam 80, atfal 73), Naw Mobain 43 and Guest was 52. Ijtema program started with congressional Tahajjud prayers on 7 October. Later in themorning at 7.00AM Flag hoisting and silent prayers led by Mohtaram National Ameer sahib, Alhajj Abdul Awwal Khan Chowdhury. After Jumma prayers formal inauguration of the 50th National Ijtema was held on the main marki of Ijtema Gah. Our beloved Huzoor (ABA) has given a special message on 50th National Ijtema, it was read on the inauguration program and as well as the concluding session. Various sports and talimi competition held this year in a big festive mode. This year total 14 Talimi Competitions were held; Imamus Salat exam was one of them & whoever passed (60 Khuddam) we gave instant prize. Along with that, special program was taken to learn Horse Riding training. We arranged 4 horses for it. We invited Bangladesh Red Crescent Society to arrange Blood Donating & free Blood Grouping program. Total 31 members donated blood in that program where Mohtaram National Amir sahib was one of them. Apart from this, free Eye checkup & free basic Medical checkup camp was established as inside separate Marki. A special magazine was published as a souvenir on the Ijtema. The cover of the book was unveiled at the opening ceremony of the Ijtema.

During Ijtema days, various sessions took place e.g. Tarbiyyati Session, Career guideline, Atfal conference and ex Sadaran of MKA Bangladesh Mulaqat. Mohtaram National Ameer sahib gave his interactive speech on Tarbiyyati session. On Friday 7 October night, we listen to Huzoor’s (ABA) Friday Sermon 12.00AM BST night at Ijtema Gah and on Sunday immediate after Fazr prayers we listen to Huzoor’s (ABA) speech at Bait-ul-Ikram Mosque inauguration program from Ijtema Gah. We had a special Rabeta program with special local guests from Print and Electronic media, local Politician persons on 8th October 2022. Ijtema news was covered by several online and print media. Ijtema Program concluded with prize giving ceremony on 9th October evening with silent prayers led by Mohtaram National Ameer sahib. He stayed 3 days with us during Ijtema program and attended every session. He also visited full Ijtema Gah. National Amer sahib guided us in various way throughout the ijtema before and after. We are grateful to him. Ijtema field preparation started almost one month ago with volunteer service by our Khuddam and Atfal. But due to continuous rains during preparation and ijtema days, it was a challenge to us to complete all the infrastructure. But by the grace of Allah and excellent voluntary efforts of Khuddam and Atfal, we’re able to overcome the challenges, Alhamdulillah.

The benison of Allah the Almighty may shower on us and we may able to perform our duties to the Jamaat in the best possible manners, Ameen.